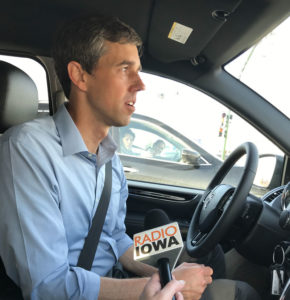 “Keokuk is our first stop in our campaign to be president of the United States of America,” O’Rourke said, to cheers.

O’Rourke stood on a chair in a coffee shop on Main Street in Keokuk to address the crowd and answer a few questions.

Chuck Betts of Keokuk  asked O’Rourke how Democrats — with so many candidates running — will be able to avoid what he referred to as “the zoo” of the 16-candidate contest Republicans had in 2006. O’Rourke said the candidates must hold one another accountable.

“Critically important that we don’t denigrate or demean any other candidate. We don’t talk about their personal lives,”
O’Rouke said and the crowd applauded. “Any single Democrat running today — and I may not be able to enumerate every single one of them right now — would be far better tan the current occupant of the White House.”

O’Rourke spoke with Radio Iowa during the half-hour trip to his next stop at Fort Madison High School and the candidate did the driving.

AUDIO of O’Rourke’s answer to this question: Why are you driving?

“It’s just a way for me to fully engage. I don’t like being on my phone, being distracted looking at emails or texts,” he said. “I want to be seeing the beautiful country…seeing that community as we pull in, really taking in Main Street and I love being behind the wheel. I love driving. I love road trips.” 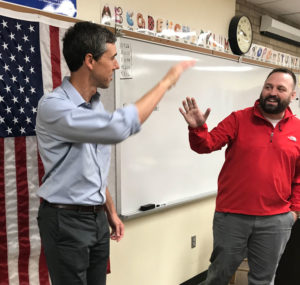 O’Rourke visited each ot the 254 in Texas for his campaign for the U.S. Senate and came within two-and-a-half points of defeating the Republican incumbent. O’Rourke, when asked how he’ll build a presidential campaign from the loss, indicates while the outcome on Election Night was tough, he and his supporters built “a movement.”

“Of course we’ve got to beat Donald Trump, but that cannot be the ultimate goal,” O’Rourke said. “The ultimate goal has to be ensuring that this country lives up to its full promise for all of us, for every single one of us — importantly, those who’ve been left behind.”

AUDIO of O’Rourke’s answers to questions about building a candidacy on an unsuccessful 2018 US Senate campaign.

O’Rourke told Radio Iowa he’s pleased “Medicare for All” has become a “dominant” discussion within the Democratic Party, but he didn’t embrace the label and suggested a single-payer system isn’t politically possible in the near term.

“I’m convinced that we will have to work from as much common ground as possible,” O’Rourke said. “No one person and perhaps no one party can force the decision on this. This has to be something that America comes together on.”

AUDIO of O’Rourke answering Medicare for All question

During his conversation with Radio Iowa, O’Rourke expressed support for the ethanol industry and expanding trade deals that benefit farmers. O’Rourke also said he would, as president, seek to end capital punishment in the federal court system.

“It’s not an equitable, fair, just system right now — the guarantees and safeguards against wrongful prosecution, the disproportionate number of people of color who compromise our criminal justice system,” O’Rourke told Radio Iowa, “and on, you know, moral grounds I oppose the death penalty.”

O’Rourke is campaigning in other cities along the Mississippi River corridor today on day one of a three-day campaign swing through the state.