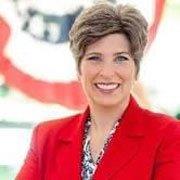 Iowa Senator Joni Ernst, a Republican from Red Oak, has unveiled a plan for new parents to use some of their Social Security savings to pay for time off work to be with the new child.

The plan does have some critics. “I do receive some push back because there others who would simply just rather throw a tax out there. That’s the easy way to solve all of the worlds’ problems I think for some — to just throw a new tax out there,” Ernst says.

She is introducing the legislation with Republican Senator Mike Lee of Utah, and calls it the “Cradle Act.” “There are studies that show that babies that are able to bond with mom and dad — they do better later in life. There are better outcomes for those toddlers and then those teenagers,” Ernst says. “And the long-terms gains of those better outcomes is not even considered in this proposal.”

Some critics say the it would undermine Social Security and force seniors to work longer. But Ernst says it is one option that would not add a lot of cost to implement. “Well certainly we’ve talked about other methods of funding, but what we have with Social Security is an existing infrastructure already in the government. Which with very, very, very minimal additional cost the program could be implemented,” Ernst says. “If we are looking at other funding mechanisms, you would have to create the infrastructure to do that, which would be extremely costly.”

Ernst says here plan would apply to biological and adopted children. Democrats have proposed a different plan that would institute a small payroll tax to provide up to twelve weeks to care for any loved one to use.