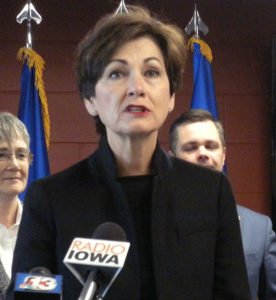 Governor Kim Reynolds says damage from the flooding in the state now totals $1.6 billion and she is asking President Donald Trump to grant the state an expedited Major Presidential Disaster Declaration for 57 counties.

Reynolds says the commander of the Iowa National Guard will do a follow up today. “They will be doing a fly over with FEMA, which is actually kind of probably the last piece with what we submitted with the expedited disaster relief that we sent in,” Reynolds says.

The governor says they have moved as quickly as they can to get the information to the president. She says they are hoping to get an acknowledgment within two days. Reynolds says she is confident after touring the area Tuesday with the Vice President that the federal designation will get approved.

Reynolds says they are still doing some response, but have shifted to recovery mode and are looking for ways to address the short and long-term needs. Initial estimates gathered by local officials indicated more than 23,000 structures were affected or received minor damage, and 1,201 received major damage or were destroyed. She says they still have people on the ground told federal officials that there could be more damage added to the list as the floodwaters continue to recede.

“I put right in the report that I submitted that I reserved the right to adjust the numbers moving forward — that’s very clear, that’s laid out,” according to Reynolds. “They have done a really good job of capturing to this point, to this point the damage to this point. Today we are at 52 counties (declared state disaster areas). Yesterday we added six and I anticipate adding more today.”

Reynolds says they want to bring local, county, state and federal officials all together to address the damage quickly. All of the levees along the Missouri River were breached — and she says that is a simple thing — they need to fix the levees and know how to do that. “So if we have drainage districts if there is a statute or state legislation that needs to be changed to allow us to coordinate and be innovative in how we address these– then we need to do it,” Reynolds says. “If there is something that we need to do with the federal level and FEMA, then wee need to do it. That’s how we are approaching this.”

Iowa Guard Adjutant General Tim Orr talked about the inspection planned today. “Really to solidify and look at the damage that’s there to reinforce to reinforce the presidential (request) that’s been submitted. I am also going to try and get on the ground and see the troops at Hamburg and Glenwood to going well in that operation,” Orr says.

The general says there is one sign that things are improving. He says they initially had liaison officers located in every county and they are now down to just one. “So that’s a good news sign for us that the counties don’t need that assistance anymore,” Orr says. “But we will continue to monitor this and we will continue to work what we currently have on the ground.”