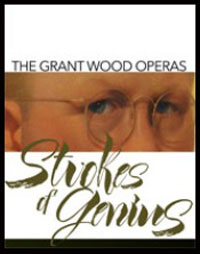 One of Iowa’s best-known artists will be honored through a different form of art next month.

“Robert wrote the one-act called ‘American Gothical’ and I bet you can guess which painting he focused on,” Michalicek says. “‘Grant Wood in Paris,’ written by Jean-Francois Charles, focuses on Grant Wood’s time in France, and then ‘Eight Woods in a Van’ is a whimsical and poignant piece written by Michael Ching.”

Charles lives in Iowa City and Ching is from Ames. The idea of producing operas celebrating Grant Wood was first hatched a decade ago, while the composers were commissioned a year ago to create their works, so it’s been a long time coming. Michalicek says folks who are new to opera may fear a language barrier, but that shouldn’t be a concern.

“It is going to be in English and we also have English supertitles above the stage,” Michalicek says, “so that people don’t miss any of the dialogue.”

Whether it’s a new opera or one that’s 300 years old, and whether it’s Italian, German, French, Russian or American, Michalicek says they all have something in common.

“Opera is always for the people,” Michalicek says. “There’s always a lot of social commentary. Look at the artists, look at the poets, the singers, the songwriters, to see what’s going on in a culture at any one time.”

The opera trilogy, “The Grant Wood Operas: Strokes of Genius,” will premiere on April 12 at Theatre Cedar Rapids, with additional performances April 13 and 14. Pre-opera talks will be given before each performance by R. Tripp Evans, professor of art history at Wheaton College/Massachusetts and author of the 2010 biography, “Grant Wood: A Life.”