You are here: Home / Fires/Accidents/Disasters / Habitat for Humanity to repair tornado damage on Marshalltown homes 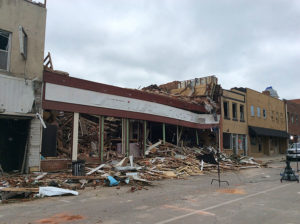 A nonprofit group that rehabilitates homes plans to repair 100 houses that were devastated in the Marshalltown tornado last summer.

Habitat for Humanity of Iowa will work to replace roofs, siding and front porches on homes in the Marshall County town that were devastated in the July 19th twister. Habitat’s Cassie Nemmers says they want to help the city get back to what it used to be. “I think Marshalltown won’t truly be the same for the next 20 to 30 years,” Nemmers says, “but our goal is to keep chugging along, doing as many homes as we can, helping as many families as we can.”

The city estimates the tornado damaged or destroyed close to 330 homes. A federal program helped them make temporary emergency repairs. Michelle Spohnheimer, with the city of Marshalltown, says from what she’s heard from other cities, it could take five years to recover.

“It’s not an overnight effort and we fully expect that, especially due to the scale that we were looking at of damage,” Spohnheimer says. “We’ve seen a lot of housing repairs. We have a lot of wonderful organizations and agencies already operating in the community.” Spohnheimer says Habitat for Humanity’s effort will play a huge role in helping the community rebuild.

Habitat plans to make repairs on up to 40 homes during the latter part of April and repair 100 houses by the end of the year. The blitz build is planned for April 23rd through 27th.