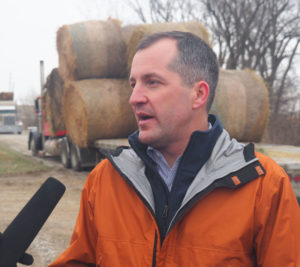 Producers from other parts of Iowa are coming to the aid of those in flood-stricken areas.

Three semis from a group of Story County cattlemen delivered approximately 30 round bales of alfalfa and 72 square bales of cornstalks to a farm near Malvern Thursday morning. Iowa Agriculture Secretary Mike Naig was on a tour of the area and says the donations to farmers impacted by the Missouri River farming is an example of “Iowans helping Iowans.”

“We knew and hear that there was a need down here in Mills County and beyond for some feed. We know that that need is great and so we just wanted to highlight the fact that this all happens because cattlemen want to help cattlemen, and Iowans helping Iowans and that is a great story.” Naig hopes the donations will continue. “This is not something that will be solved tomorrow,” Naig says, “this is a need that will continue on for months. And so, we just ask people to be mindful of that and keep that in mind, and continue to look for ways to assist those who have been impacted.”

Naig says state officials will demand answers from the U.S. Army Corps of Engineers on why southwest Iowa is experiencing the second major flooding event along the Missouri River within a decade. Naig also warns that producers should be prepared for the long haul. “We’re just at the end of March here. We still have some snowmelt up north. Our flooding is not entirely done this year,” Naig says. “Whether it’s here or other parts of the state — folks need to be vigilant on what is happening and take precautions if they need to.”

Plans called for Naig to tour flooded areas in and around Hamburg this afternoon. U.S.D.A. Undersecretary Bill Northey and Iowa Senator Charles Grassley are expected to meet with officials in Hamburg and Glenwood Friday morning, then conduct a town hall meeting at the Mills County Fairgrounds in Hamburg Friday afternoon at 1:30 p.m.