You are here: Home / Fires/Accidents/Disasters / Governors of Iowa, Nebraska and Missouri seek ‘straight up answers’ from Army Corps 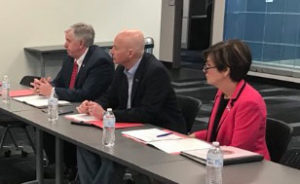 Iowa’s governor joins her counterparts from Nebraska and Missouri to talk about flooding.

The governors of Iowa, Nebraska and Missouri are asking the Army Corps of Engineers to come up with more flood-prevention solutions.

The three governors and Army Corps officials met this in Council Bluffs and plan to meet again in three weeks.

“We can’t continue to experience the type of floods that we’ve gone through here in the last recent days,” Reynolds said during a news conference.

“We have to do something different along the river,” he said. “This is not going to be acceptable for us to continue to be experiencing these flooding episodes.”

“We need some straight up answers from the Corps of Engineers of how they’re managing the river,” Parsons said. “…Something needs to change.”

Reynolds said the three governors are ready to lobby congress for changes in Army Corps regulations that have governed how the Missouri River levee system is managed.

“These are three governors that are going to be engaged and active in looking at different solutions in how we move forward,” she said, “so that we don’t continue to have a repeat.”

Reynolds indicated the governors have asked the Corps to ensure any temporary construction to repair damaged levees can be part of the permanent levee system.

“We have cities right now, communities right now and towns that are underwater,” Reynolds said, “and so we have to stop the inflow, do the temporary fix, start to assess what the breaches look like and how we move forward.”

Missouri’s governor suggests state officials should have “a more active role” in making the decisions about long-term river management. Travel difficulties prevented the governor of Kansas from attending today’s gathering and she plans to be part of the next meeting in three weeks.

(Photos from the twitter accounts of Governor Ricketts and Parsons)