You are here: Home / Crime / Courts / Man dies after being shot in Sioux City home invasion 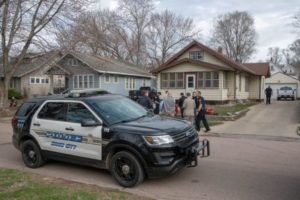 Sioux City police say a man who was shot in what appears to be a home invasion Tuesday morning has died.

Detective John Sanders says they were first called on the report of a disturbance at the home and shots were fired 10 minutes later. “A subject at this location had broken out a window on the second floor of the residence and jumped off the porch of this residence. He had left the residence prior to officers arrival,” according to Sanders.

Sanders says the person who went through the window was apparently fleeing from the person living in the home. “A resident of this address stated that he came into the residence and was breaking things in the kitchen area, and then started to assault the homeowner,” Sanders says. “The resident retrieved a weapon during the struggle with the supect, and a shot was fired during the struggle. The suspect was shot and was transported to Mercy Medical Center, where he subsequently died.”

Sanders says they are still trying to learn more about what happened.”At this time there is no evidence that these individuals knew each other or had any association. We do not know the motive for the burglary or the assualt at this time,” Sanders says. He says the person who lived in the home called 9-1-1 after firing the shot and that person was also treated for non-life-threatening injuries.

The names of the two people have not been released, and no charges have been filed as the investigation continues.