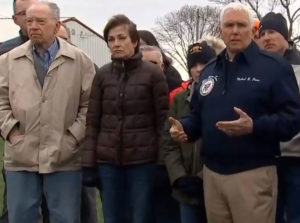 “As Democrat senators coming through Iowa asking for your vote, the people of Iowa ought to be asking Elizabeth Warren, Amy Klobuchar, Cory Booker — ask them why they voted against disaster assistance for Iowa,” Pence said in southwest Iowa.

Pence was in southwest Iowa earlier today, surveying flood damage and recovery efforts — and he told reporters the amount of damage that remains in the area was beyond what he had expected.

“The magnitude of the collapse of levees that’s continuing to keep these flood waters rising high — we’ve got work to do,” Pence said.

President Trump has approved Governor Kim Reynolds’ request to declare much of Iowa a presidential disaster area due to the recent flooding and storms. 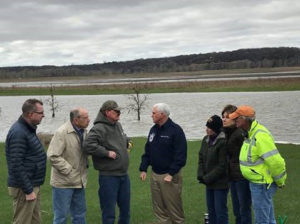 “President’s done his job. The governor’s done her job,” Pence said. “Now it’s time for Democrats in the Senate to do their job.”

Iowa Republican Joni Ernst was among a group of U.S. Senatros who met with President Trump Thursday about the negotiations.

“Just reemphasizing to the president that we need to get this done, to work on a compromise package with the Democrats,” Ernst said. “Let’s get the deal done. Let’s get the assistance where it needs to go.”

“We know what the damage is. We know where we have to start. We need the funding to implement it,” Reynolds said. “We are early on in the season. We have a levee system that is breached and as we continue to see high rains and snow melt, we’re going to continue to be impacted by this.”

Iowa Senator Chuck Grassley, who has said this spring’s flooding is still “an active event,” said congress must take a “bipartisan approach” to its response.

“There has not been a single disaster that when the funds run out for FEMA and other programs that they haven’t been in a very consensus way re-instituted and replenished by the congress of the United States,” Grassley said.

Pence toured a farm southwest of Pacific Junction that was hit by last month’s flooding. He also took an aerial tour of the flooding. Next Wednesday, Senator Ernst will convene a hearing in Glenwood to discuss U.S. Army Corp of Engineers management of the Missouri River.

(By Ryan Matheny, KMA, Shenandoah/Photos from the Vice President and Senator Joni Ernst)