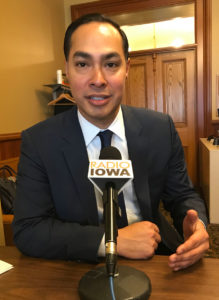 “I do think for some people who are uncomfortable going on one night — or they can’t go there on one night ’cause they’re working — and declare their intention in front of many other people, that being able to do that absentee will ensure that more of them actually participate in the process,” Castro said, “which will be a good thing.”

Castro, who spent the past two days campaigning in eastern and central Iowa, is 44 years old. He’s been making the argument on the campaign trail that Americans are ready for a “new generation of leadership.”

“Having served as the mayor of the seventh-largest city in the country, I have a track record of getting things done,” Castro said during an interview with Radio Iowa.

Castro was San Antonio’s mayor for five years before he served as U.S. Secretary for Housing and Urban Development in the Obama Administration. Castro was born in San Antonio and often mentions his grandmother was a six-year-old orphan who crossed the border into Texas after her parents died in the Mexican Revolution.

Castro recently released what he calls a “People First” immigration plan. He’d significantly boost U.S. investment to stabilize the Central American countries many of those seeking asylum in the U.S. are fleeing. Castro would make illegally entering the U.S. a civil offense — punishable with a fine — rather than have illegal entry continue to be a crime.

“This president has tried to, effectively, use immigration in an emotional way to divide people,” Castro said. “…I’m going to tell about the human lives that are impacted and what we can be as a country that if, of course, we have secure borders, but we also treat people with respect and with compassion and I believe that there are enough people in Iowa and throughout the country that will believe in that.”

Castro said immigration has helped the U.S. economy grow in the past and the U.S. needs immigrants today to fill jobs.

Castro formally kicked off his presidential bid in January and has raised about $1.1 million for his campaign in the first three months of the year. Castro told Radio Iowa if Democrats choose him as their nominee, he will present himself as “the opposite” of Trump.

“Even to those people who agree with this president, you know I think you also want somebody who that’s being straightforward with you and being open and honest,” Castro said. “And I would say: ‘Don’t mistake bluntness or vulgarity for honesty.'”

Like many of his competitors for the Democratic Party’s 2020 presidential nomination, Castro supports the goal of “Medicare for All” as well as universal preschool and renewing the federal ban on assault-style weapons.