You are here: Home / News / April saw fewer showers and snowflakes than normal 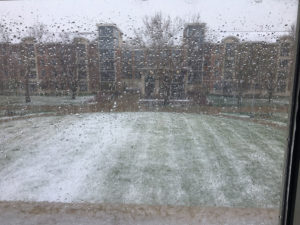 Snowfall in April was below average.

If you aren’t yet finding many flowers in your yard, that could be due to a drop in April showers.

State Climatologist Justin Glisan reviewed the rainfall totals for the just completed month. “We had a deficit of precipitation — especially in the southwestern part of the state — which had been so wet to begin with over the fall and into the winter,” Glisten says. “Statewide precipitation was about three-point-zero-eight inches of rainfall and snowmelt And that’s almost a half an inch below normal as well.”

He says we were short in every type of precipitation — including snow, despite a snowstorm in parts of the state last weekend. “Now we don’t expect a lot of snowfall,” Glisan says, “but we were about four-tenths of an inch below average. We typically get about 1.6 inches.”

The temperature in April was just about in line with the statewide trend. “Our average temperature was about 49 degrees — and if you look at the statewide average — that’s just a half a degree below average,” according to Glisan.

There were no reports of severe weather during April. Glisan says May is shaping up to be on the cool and wet side.