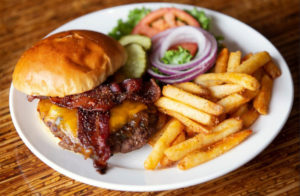 If you love a juicy bacon cheeseburger, you’ll need to head for southeast Iowa and the Wood Iron Grille in Oskaloosa.

The eatery is the winner of the 2019 Iowa’s Best Burger Contest. Kylie Peterson, at the Iowa Beef Producers Association, says there were some 500 restaurants nominated statewide, a long list that was narrowed down to ten finalists.

“Ultimately, it’s the burger patty itself that’s being judged and they had the juiciest, the tastiest and the best-seasoned burger out of the top ten,” Peterson says. Iowans submitted more than six-thousand votes in the contest and a panel of judges visited each of the ten finalists, with the Oskaloosa grill coming out in first place. She says the owners were thrilled.

“They’ve only been in business for about six months now so this is something they had their eyes set on from the beginning,” Peterson says. “They are just very honored and business is going to be booming for them.”