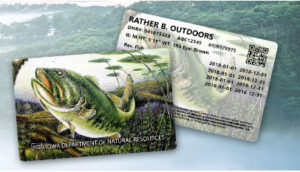 The DNR is offering a new hard card fishing license.

The state’s hunters and anglers will be able to access a range of services through a new section on the Iowa Department of Natural Resources’ website, according to DNR spokesman Alex Murphy.

Murphy says, “GoOutdoorsIowa is our new online licensing system that’s really intended to be a much more user-friendly version for buying licenses, for managing their accounts, reporting harvests, and requesting special hunts, things like that.” The system was launched in February and is being touted as a “modern technology solution” with efficiencies and benefits for users, especially those who carry smart phones.

“If you download the GoOutdoorsIowa DNR app, you can access your hunting and fishing licenses anywhere anytime,” Murphy says. “It’s nice, when you’re out in the middle of the woods hunting, you can easily pull up your licenses if you’re stopped by one of our conservation officers.” For hunters and anglers who want something more durable than a paper license, there’s a plastic version available in two different designs — a largemouth bass or a pheasant — created by native Iowa artist Bruce Gordon.

“The ‘hard card’ is a feature we’re offering with this,” Murphy says. “It’s a five-dollar card. On the back of it, it has your license printed on it for the year. For people that have lifetime hunting and fishing licenses, it can be used as a permanent card. For everyone else, you’ll have to get it reprinted every year, if you wish.”

The app is downloadable for free through the App Store or Google Play Store and allows users to view hunting regulations, current sunrise/sunset times and much more.