You are here: Home / News / Warren says candidates should not chase Trump down ‘crazy rabbit hole’ 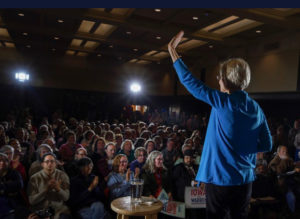 Massachusetts Senator and Democratic presidential candidate Elizabeth Warren used a visit to Iowa State University to unveil a new tool on her campaign website. It calculates how much an individual’s student loan debt would be reduced under her plan.

“We’re just trying to roll this out as a way to make real to people what it means to talk about student loan debt cancellation,” Warren said. “…It’s now the case that we are crushing an entire generation with student loan debt.”

Warren’s plan to erase up to $50,000 in student loan repayments would apply to households with an annual income of less than $100,000.

Warren has unveiled a series of policy proposals including a new “wealth tax” that would be charged to Americans with assets of more than $50 million. She says that additional tax revenue would pay for child care, universal preschool, free tuition to public colleges and universities as well as her plan to erase student loan debt.

“I’m just tired of free-loading billionaires,” Warren said. “Let’s get ’em to pay a fair share and let’s create an opportunity for everybody else in this country.”

Warren addressed about 400 people in Ames on Friday afternoon. During a question-and-answer session, Warren was asked to contrast her ideas with those of her Democratic competitors — and Warren was cheered when she declined.

“We have a special opportunity in a primary,” Warren said. “…It’s not just to chase that guy down the crazy rabbit hole with his crazy tweets and everything else he does, but it’s to talk about our vision.”