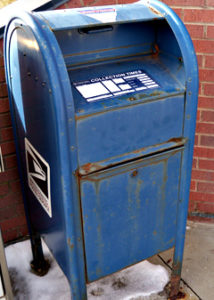 A former Belmond resident will serve three years on federal probation for possessing stolen mail from his wife’s postal route.

Fifty-year-old Timothy VanZweden of Clarion pleaded guilty to one count of possession of stolen mail. In the plea agreement he admitted that while living with his wife in Belmond in 2017 he had thrown out a large trash bag that contained mail. Officers used a search warrant and found five letters taken from the wife’s mail route in the garbage, and a counterfeit key used to unlock mail holders.

VanZweden also admitted to burglarizing two homes on his wife’s mail route. He said the homeowners were “beautiful people” for whom everything in life came easily — and one of the women was snotty to him and looked down on him.