You are here: Home / News / Thousands of chickens killed in Fayette County accident 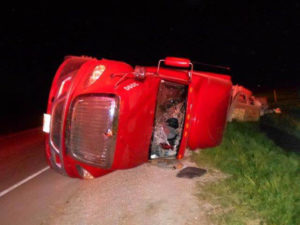 This semi driven by Tony Raske of Alden rolled over in Fayette County.

An accident in Fayette County totaled a semi and left thousands of chickens dead.

At about 1:30 a.m. Tuesday , the Fayette County Sheriff received a 911 call, reporting a semi rollover on Highway 18, about one mile west of West Union. Forty-four-year-old Tony Raske of Alden was hauling a trailer-load of chickens, about 5,000 of them, when he lost control and drove into the ditch.

The semi and trailer rolled, killing about half of the load of chickens. The birds that survived were rounded up and loaded onto another semi. Raske and a child passenger sustained minor injuries and did not need hospitalization.

Raske’s 2012 International Semi, along with the 2017 Load King trailer, were deemed a total loss. Raske is being charged with failure to maintain control. 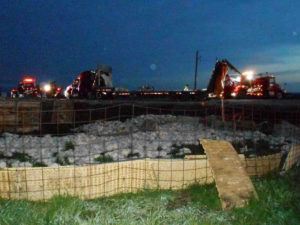 The chickens that survived the accident were rounded up.