You are here: Home / Outdoors / Monarch migration expected to include more butterflies this year 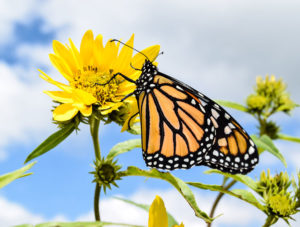 Iowa State University researchers say the largest population of monarch butterflies in more than a decade could be headed to Iowa and the Midwest later this spring, prompting a good news-bad news scenario.

Steve Bradbury, an ISU professor of natural resource ecology, says some 225-million adult monarchs may arrive in the next month or so and they’ll need more milkweeds on which to breed. “If these numbers coming up are as high as we think they might be, we could be overwhelming the amount of milkweed we have in the upper Midwest and Iowa,” Bradbury says. “What we want to do is build our habitat bank, if you will, in Iowa, up to the point that we can maintain those high numbers of monarchs.”

Iowans in rural and urban areas are encouraged to create milkweed habitats, as that’s the only place the important crop pollinators will lay their eggs.
“It’s very helpful if folks in Des Moines and Sioux City in their gardens are getting habitat patches started and county parks and city parks, Iowa renewable fuel facilities, getting their patches in,” Bradbury says. “It all combines and is important.”

If the state wants to maintain higher numbers of monarchs, it will need to add a half-million to a million acres of habitat over the next ten to 20 years. Habitat loss and pesticide use have caused monarch populations to drop over the past decade. In recent years, Iowa’s cities, farmers and individual Iowans have joined to create or preserve habitat that’s vital to monarchs, including the cultivation of nectar plant gardens.

“Getting new habitat in the ground is picking up the pace,” he says, “and people being really careful about the habitat that’s already on the landscape and protecting it.” Bradbury says expanding monarch habitat in Iowa will play a major role in the recovery of the species.