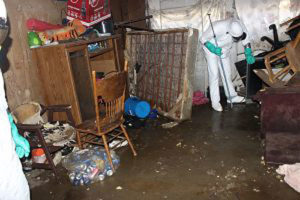 Officers had to wear protective suits in the Storm Lake home.

Three people are charged with animal neglect after more than 50 animals were removed from a house in Storm Lake on Wednesday.

Police were notified by a neighbor about the conditions in the house, and 30 dogs and 21 cats were removed by police officers and firefighters. Police say there was a large amount of feces and urine on the floor of the house. Officers wore hazmat suits to remove the animals.

Three people were charged with one count of child endangerment and 15 counts of animal neglect: 58-year-old Juana Munoz, 28-year-old Veronica Munoz, and 22-year-old Myra Lopez-Munoz, all of Storm Lake. A 17-year-old juvenile was removed from the house and placed with a relative. 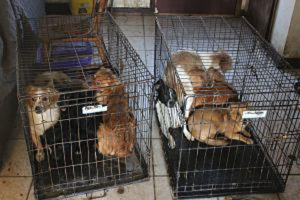 Some 30 dogs and 21 cats were removed from a Storm Lake home.

The animals were taken to a local animal hospital for evaluation. City building officials red-tagged the house until living conditions can be corrected.