You are here: Home / Fires/Accidents/Disasters / Proposed virtual reality video will teach about dangers of drowsy driving 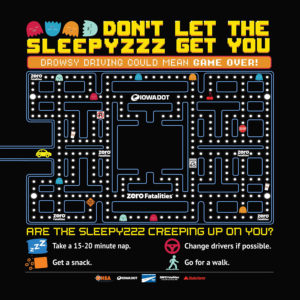 Zero Fatalities Iowa has won a national grant to continue its efforts to educate drivers about the dangers of driving drowsy.

Tracey Bramble of the Iowa DOT says the started the campaign two years ago with displays in rest areas that look like the Pac Man game and say “Don’t let the Sleepyzzz get you.” The new plan is to develop a virtual reality visualization that shows drowsy driving is not a game.

“For the drowsy driving visualization — what we’re thinking of is you’ll be the passenger in vehicle where the visualization shows the driver as being drowsy. It’ll give you a couple of options of what should you do if you are ever in that situation,” Bramble says. She says they want drivers to be able to recognize when they are in these situations and know what to do.

“The advice that this campaign the whole way through is giving — the best way to avoid drowsy driving is to get enough rest,” according to Bramble. “And if you are drowsy, stop and just close your eyes for ten or fifteen minutes and that will do wonders for you. Rolling down the windows and eating doesn’t really help a whole lot.”

The National Highway Traffic Safety Administration estimates that driving drowsy causes more than 100,000 crashes, 1,550 deaths, and 71,000 injuries every year. Bramble says it is hard to know how many drivers in Iowa are behind the wheel without enough sleep. “Law enforcement will pull someone over who may be swerving and if there is no an impairment and the driver just says ‘oh I’s just a little tired,’ typically that law enforcement officer will says ‘okay jut get some rest.’ They don’t really record those incidents, so they are very under reported, because it’s not technically a violation unless you are driving very erratically.”

She says shift workers are often the ones who end up getting behind the wheel without enough sleep. “People think that we are all agriculture, but we have a large manufacturing base that does have a lot of shift workers,” Bramble says. “And those shift workers are right in the target of drowsy driving, so we are trying to reach them too.”

The $15,000 grant from the Governors Highway Safety Association (GHSA) and The National Road Safety Foundation will allow them to develop the virtual reality experience. “We are working with Iowa State University to develop it. Our goal is around Thanksgiving to the Christmas time frame. And people will be able to access it, we are going to start a virtual reality library,” Bramble says. She says the virtual reality library will have the videos they produce for the Iowa State Fair booth along with this new video.

Iowa is one of five states to receive funding to continue its program. Zero Fatalities Iowa is a collaboration between the DOT, public safety, public health, and the Iowa Insurance Division to try and drop the number of fatal accidents on Iowa roadways to zero.