You are here: Home / Fires/Accidents/Disasters / Deadly storm near Adair confirmed as EF-2 tornado 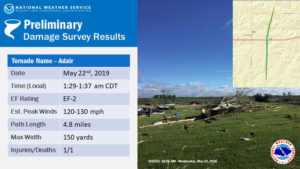 The National Weather Service says a tornado that killed a woman near Adair was EF2 strength.

The preliminary report from the NWS  says the tornado had estimated peak winds of 120-130 miles-an-hour. The path of the tornado was nearly five miles long and 150 yards wide.