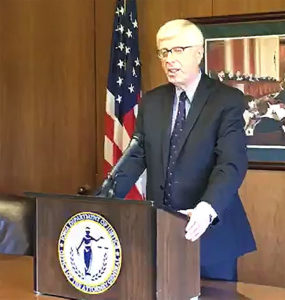 “There are 26 other Democratic A.G.s to carry on and do what needs to be done,” Miller said during a news conference.

Governor Reynolds this morning used her item veto authority to nix a policy that would have forced Miller to get permission from her, the state’s Republican-led executive council or from the legislature’s Republican majority to join lawsuits filed in courts outside of Iowa. However, Miller has struck what he calls a “good faith agreement” that’s not set in Iowa law and has promised to seek the governor’s consent before joining any multi-state lawsuits over the next 20 months.

“My main concern about this was over the institution of the office of attorney general and the future of the office and my successors,” Miller said.

Miller said he’s pleased a Democrat and a Republican could make this deal at a time when there are few examples of good faith bargaining in politics.

“What has happened here has been a good compromise,” Miller said.

Miller said during his first term in office, attorneys general from other states explained the importance of the powers and duties of the office — and that weighed on his mind.

“I won’t be haunted by the ghosts of my elders as a result of the governor’s veto,” Miller said.

Miller also got some back-up from current attorneys general, including from Republicans in Idaho and Nebraska, who urged Reynolds to reject the proposal from GOP lawmakers. One of the Republican legislators who sought to put restraints on Miller in state law said he’s pleased the governor pursued this compromise — and if Miller intends to challenge Trump Administration policies in the future, he’ll be doing so under his own name rather than on behalf of the State of Iowa.