You are here: Home / News / U-I scientist retiring after 60 years of space projects 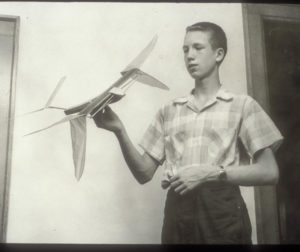 Don Gurnett poses in 1956 with a rubber band-powered model ornithopter that he built and set a national record for the longest time in flight.

One of the University of Iowa’s most accomplished space scientists is retiring. Professor Don Gurnett is retiring after spending more than six decades at the Iowa City institution, first as a rocket-building student, then as a professor and researcher.

Gurnett enrolled at age 17 in the fall of 1957 when the Russian satellite Sputnik was making headlines. His teacher and mentor was James Van Allen, who discovered the radiation belts around the Earth — and the man for whom the U-I’s physics and astronomy building is named. “It was a pleasure to work with Jim Van Allen,” Gurnett says. “He was a very pleasant guy and he played an important role in my life, giving me advice at a very early age in the space program.”

In addition to teaching undergrad and graduate-level classes for more than 50 years, Gurnett has published more than 700 papers, plus, he designed and built instruments for more than 35 space missions. Those include Cassini which went to Saturn, the Juno mission to Jupiter and the Mars Express expedition.

He says he’s most proud of his work building the radio wave and plasma wave instruments aboard the two Voyager spacecraft which visited Jupiter, Saturn, Uranus and Neptune. “Because these planets go around the sun at a different rate, in 1977, there was a unique opportunity to fly by all four of them with one single mission,” Gurnett says. “That opportunity only comes about once in every 180 years.” 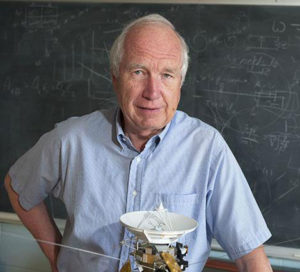 Gurnett poses in 2016 with a model of one of the Voyager satellites.

Not only were the those missions successful, but both Voyagers are -still- functioning and sending back data more than 40 years later. The twin spacecraft are now nearly 12-billion miles away, exploring the distant reaches of the solar system and interstellar space.

Gurnett puts that distance into perspective. “When Mission Control would ask a question of the astronauts on the Moon, they would answer with a delay of about two seconds,” Gurnett says. “We’re out there so far, it takes 18 hours for the radio signal to get back.” While his title is shifting from professor to professor emeritus, the 79-year-old Gurnett says his retirement is really more of a semi-retirement, as he still plans to come into work routinely.

“I actually do have plenty of leftover things, and even presently operating things, like Voyager 1 and 2,” Gurnett says. “I’m a principal investigator on that and funded by NASA, so I’m going to continue to work on data returning from those missions.” Today is the last official day on the job for Gurnett.