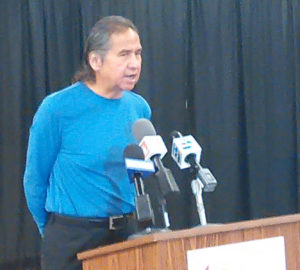 Lance Morgan is the CEO of Ho-Chunk — the tribe’s economic development agency — and a close friend of LaMere, who he says recently went through surgery for bile duct cancer.  “His attitude was strong, but I think it was just too much to overcome. It’s just a real loss,” according to Morgan. He says LaMere was like another father figure to his children and his death will be a real loss to his family.

Morgan says LaMere’s work paved the way for Ho-Chunk’s success and other tribal endeavors. “I always tell people he kicked in the door and I just walked through it,” Morgan says. “Without his type of fortitude and dedication, the things that we have been able to do for the community and the tribe wouldn’t even have been possible.”

LaMere  was known for his work in combating drug and alcohol addiction in the Native American community. He’s been part of a push to bring more services to Sioux City. LaMere received an honorary doctorate from Nebraska Wesleyan University in May in recognition of his lifelong work, which included protecting Indian children from being removed from their homes and stopping the sale of liquor in Whiteclay, a reservation border town.

The Director of the Sioux City Human Rights Commission, Karen Mackey, says Whitclay is one of the things that stick out for her in remembering him. “And how that was 20 years in the making. He never gave up. He kept working toward a future really hardly anyone else could see,” Mackey says. ” I never thought he would succeed in shutting down alcohol sales at White Clay. That was an amazing thing.”

Sioux City Mayor Bob Scott released a statement saying “As a passionate activist for the Native American community, Frank was instrumental in working with elected leaders, law enforcement, the public health sector and non-profits to find solutions to issues that face the Sioux City community and beyond. His ability to effectively engage people in difficult discussions about drug and alcohol addiction and homelessness over the years was evident in community initiatives like the Siouxland Street Project. Frank was an advocate for people who need help but don’t know where to turn. Frank was their voice. ”

A statement from LaMere’s son Manape says: ” Our father Frank LaMere crossed over to the other side of this river of Life. We’ll make preparations for his journey in the coming days.”