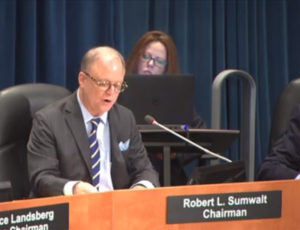 NTSB chair Robert Sumwalt says driver impairment was an issue as 74-year-old bus driver Donald Hendricks used a walker and had back surgery scheduled the week of the fire. Hendricks and 16-year-old Megan Klindt died when the bus got stuck and caught fire in Klindt’s driveway near Oakland.

“Robust oversight on the part of the school district should ensure the safety of student transportation. But in Oakland, Iowa, that did not happen,” Sumwalt says. He says school buses are safer than passenger cars for getting kids to school if the drivers are medically fit.

“The driver in Oakland had been allowed to continue driving despite the fact that the transportation supervisor, the school principal, and the driver’s coworkers knew of the driver’s physical impairment,” according to Sumwalt. “The Iowa administrative code specifies that drivers must be physically able to help ill or injured passengers.”

Sumwalt says the school district had the information needed to prevent the tragedy. “The Riverside Community School District or the RCSD had the knowledge it needed to act. And it did not. And in fact, in recent years, it had done away with the physical performance tests for drivers,”Sumwalt says.

Investigators said the fire likely started in the turbocharger of the bus, which overheated after the rear tires became stuck. Sumwalt says this case shows that installing a fire suppression system may have prevented the deaths  “Fire suppression systems, fire-resistant interior materials, and improved fire safety performance standards could have provided more time for the driver and the student in this tragedy,” Sumwalt says. He says federal standards for school bus fire safety haven’t significantly improved in the last 48 years despite major changes in fire safety in aviation and railroad transportation.

Sumwalt says the NTSB knows there is a shortage of school bus drivers, but the solution cannot be to augment the ranks of safe drivers with drivers who are unsafe due to a medical condition, even a temporary one. He says keeping an unfit driver on the road isn’t kindness. “Once there is a crash, it is cruelty—to him and an untold number of passengers and other road users.”