You are here: Home / Agriculture / Lots of corn will struggle to be knee-high by 4th of July 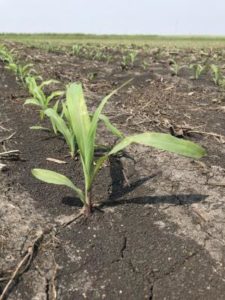 Corn in the early stage of growth. (ISU Extenstion photo)

The tropical temperatures are hard on people — but they are good for the corn crop that’s running about two weeks behind in normal in development.

ISU Extension field specialist Rebecca Vittetoe says the heat will help — but not all the corn will hit the mark in the old adage: “knee-high by the Fourth of July.” She says some of the earlier planted corn will make it — but the later planted corn will be lucky to be knee-high.

Vittetoe covers Benton, Linn, Jones, Poweshiek, Iowa, Johnson, Marion, Mahaska, Keokuk and Washington counties in east-central Iowa. The corn height is measured by the amount of vegetative growth or leaf collars as it extends upward, starting with V-1. “This week we’ve really seen the crops move along, you can almost see them grow with the heat we’ve been having,” Vittetoe says. “Corn, it probably ranges anywhere from V-2 or V-3 with the later planted corn. To probably, some of that corn is probably V-11, V-12.”

The corn can grow to the V-19 or V-20 stage before it tassels out and starts the process of developing the ears. Vittetoe says she doesn’t like being out in this heat, but likes what it does to the corn. “The heat will definitely help it grow. And if we’re going to have hotter temperatures I’d like it — especially on the corn side right now. I don’t want it when the corn is going to be pollinating and tassling and forming that ear,” Vittetoe says. “Having the heat now is going to help push it along and once we reach tassel and grain fill, I’d like it to cool off so we can have a longer grain-fill period.” 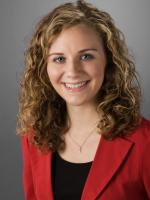 The corn is normally ready to start the tassling phase around mid-July, but she says that could be the end of July or early August this year. Vittetoe has talked with her colleagues and is hearing there’s a large variance across the state in corn development.

“Some cases, I know like northern Iowa, especially northwest Iowa, they had really delayed planting. Other parts of the state, like southwest Iowa were not as delayed,” according to Vittetoe. “It does vary, and even varies within the county too, depending on who got the rain and if it was river bottom too,” she says.

Getting the seed in the ground helps ease some of the concern for farmers. “Earlier in May there was definitely a lot of anxiousness. You could sense the stress just talking to people,” Vittetoe says. “You can still feel some of that anxiousness….it hasn’t been an easy growing season by any means. It’ doesn’t seem quite as much, you don’t feel it quite as much — but it’s still there.”