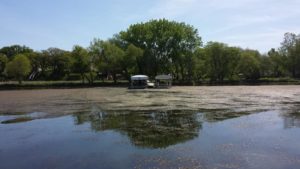 A spokesman with the Iowa Department of Natural Resources says the treatment of an invasive plant in the Iowa Great Lakes region was a little tougher this year.

The curlyleaf pondweed is treated with a herbicide or cut out of the water. The DNR’s Mike Hawkins says cutting and harvesting the invasive weed was tough as it didn’t reach above the surface on East Okoboji Lake.

“When it’s just below the surface, it gets hard to see, it’s hard to navigate out there. It’s analogous to kind of mowing the grass when you can’t see where you’ve been,” Hawkins says.

Hakwins says the cooler spring probably kept the plant from growing as much as it normally does. He says the curlyleaf pondweed has already died back on East Okoboji Lake and he’s concerned the breakdown could fuel algae blooms on the water.
“The worst thing that can happen when something like that happens is we would have a summer kill, a fish kill, that so far hasn’t happened. We‘ve been really, really fortunate that that hasn’t happened,” according to Hawkins.

Hawkins says they treated a little less than the planned 85-acres this year. He says the plant seems to grow differently every year, making it tough for scientists and locals to predict what’s next.