You are here: Home / News / Pate warns Iowans to be wary of Russian manipulation online 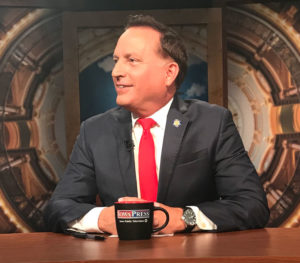 Secretary of State Paul Pate predicts Election Day voting sites in Iowa may be consolidated in the future. Currently, an Iowa voter must cast their ballot at one of the 1681 neighborhood precincts on Election Day.

“You’re going to potentially see clustering and creating more voting locations in one site, if you will,” Pate says. “Eventually — and this is way down the road — but you’ll see some ‘vote centers’ where you if you live in Dallas County you might be getting a chance to vote in Polk County because of your commute, so there’s a lot of technology coming down the line that might give you that opportunity.”

When it comes to the negative side of technology and the potential for hacking, Pate says election officials, as well as Iowa’s 99 county auditors who manage elections, have taken cyber security very seriously.

“We’re trying to improve on them every day, because there’s new things coming at us, but we have to do that and we’re going beyond that,” Pate says. “I’m meeting with county boards of supervisors, saying: ‘It’s not enough to protect the auditors. We need to protect your whole courthouse.'”

Pate, who was recently elected chairman of the National Association of Secretaries of State, says the Russians have not been successful in changing a single vote, but Pate says they have attacked “our minds and public opinion” much more effectively.

“They manipulate things. They put messages and propaganda out there, creating doubt and that’s a sad thing and it’s very dangerous because when Americans start questioning the integrity of the vote, going: ‘That’s not my president.’ ‘That’s not my governor,’ we’ve got problems,” Pate says, “so as secretaries we are calling out our colleagues, we are going to the media, we are going to the public and saying: ‘Don’t take things at face value. You really do have to go beyond saying: “just Google it.” You have to seriously look at where you’re getting your information from and make sure you’re not getting played.'”

Pate made his comments during taping of the “Iowa Press” program that airs tonight at 7:30 on Iowa Public Television.