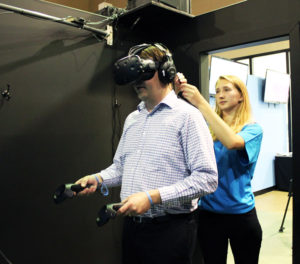 A man with virtual reality goggles prepares to play.

Whether you enjoy a walk in the woods or you’d rather blast robot invaders with lasers, a new arcade in eastern Iowa offers an array of entertainment options. What’s thought to be Iowa’s first virtual reality arcade opens this weekend in Cedar Rapids.

Katie Ripke, with VenuWorks, says there are six separate rooms where players don goggles and headsets and take a controller in each hand. “We do have the ability to play multiplayer games,” Ripke says. “So, players would still be one per room but we can connect them together so they can battle zombies together and save the world.”

The CRVR is located in the newly-renovated lobby of the Cedar Rapids Ice Arena. The arcade’s library of games will start with 14 popular titles including VR Battle Grid, Arizona Sunshine, and something called Job Simulator. “The one I saw demonstrated, the person was pretending to be a chef,” Ripke says. “There are these robots that give you orders and if you screw up, they mock you, and you can take over the kitchen and drink wine and other things. It actually ended up being a pretty entertaining game to watch and the person playing had a great time as well.” 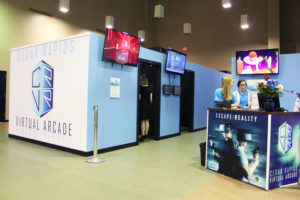 One game is sort of like immersing yourself Google Maps, she says, where you can simply explore a variety of landscapes. During the arcade’s soft opening, Ripke says the game Beat Saber attracted a lot of players. “Beat Saber is similar to Guitar Hero where you have to hit a beat but you’re hitting them with light sabers,” Ripke says. “The difficulty can accelerate pretty fast.”

It’s expected the CRVR will be a popular attraction as the ice arena brings in more than 200,000 visitors each year. Unlike the video games of old, these will cost more than a quarter to play. “It’s $15 for 30 minutes or $30 for a full hour,” Ripke says. “You could pay a $10 lifetime membership fee just one time and after that, your hour sessions go down to $25.” Initially, the venue will be open daily from 3 to 10 p.m., though that may change based on demand.