You are here: Home / News / Biden says he has ‘reasonable’ plan to expand Affordable Care Act 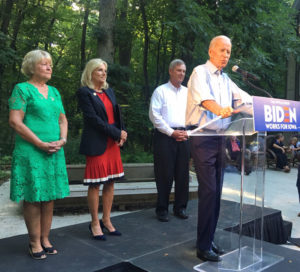 Former Vice President Joe Biden says he wants to improve, not replace the Affordable Care Act, by adding a “public option” — letting people under the age of 65 buy Medicare-like coverage.

“I think it’s the quickest, most reasonable, rational and best way to get to universal coverage,” Biden said earlier this afternoon at a forum sponsored by AARP Iowa and The Des Moines Register.

Biden’s plan differs from competitors like Bernie Sanders and Elizabeth Warren who’ve proposed a “Medicare for All” system that would mostly end private insurance.

The remark was reminiscent of President Obama’s pledge that Americans who liked their doctor could keep their doctor once the Affordable Care Act took effect. Biden released his own health care plan a few hours before appearing on stage at Drake University.

Three other Democratic presidential candidates spoke at the event. A few hours before the forum, Minnesota Senator Amy Klobuchar released a series of proposals like addressing fraud targeting seniors and boosting research into Alzheimer’s treatment.

“And it just bugs me, speaking of the Affordable Care Act, that instead of moving on these issues that this president is just…trying to re-litigate the Affordable Care Act over and over,” Klobuchar said. “I don’t think we should re-litigate it. I think we should need to it better and then move on to working on long-term care and helping our seniors.”

Klobuchar, like Biden, supports adding a public option to the Affordable Care Act.

New Jersey Senator Cory Booker has co-sponsored a “Medicare for All” bill in the U.S. Senate, but Booker told the crowd he supports creating a public option to buy-in to Medicare as well as lowering the age of Medicare eligibility to 55.

“I’d just say there’s lots of ways to get to my ultimate goal which is everybody in this country having health care,” Booker said. “, “…I don’t think it’s likely that we’re going to have some kind of massive transformation of our system, so as a former chief executive, I know you’ve got to take steps towards your goal.”

Booker is the former mayor of Newark, New Jersey. Former Denver Mayor John Hickenlooper, who’s also the former governor of Colorado, was the other candidate to speak at Monday’s forum on senior issues. Hickenlooper argued Democrats should not to “embrace massive expansions of government.”

Hickenlooper supports the idea of adding a public option to the Affordable Care Act.

More candidates will take part in four MORE forums focused on healthcare and senior issues. Kamala Harris, Kirsten Gillibrand and Julian Castro will be on stage in Bettendorf Tuesday afternoon. All five forums are being livestreamed on The Des Moines Register’s website.