You are here: Home / News / A new bishop for the Des Moines Catholic Diocese (AUDIO) 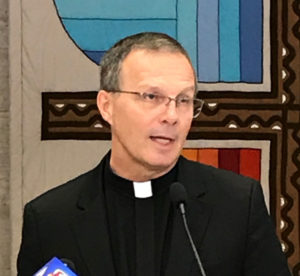 Pope Francis has named a bishop-elect for the Des Moines Catholic Diocese to lead more than 100,000 Catholics in 80 parishes. Father William Joensen will be ordained as bishop on September 27.

Joensen spoke this morning during a news conference at the Diocese headquarters in Des Moines and admitted he was a bit dazed when notified of the appointment.

“Beyond surprise and some trepidation, though, by heart was stirred and filled with peace and attraction to this position, to this church here in Des Moines,” Joensen said, “for I am, thoroughly, an Iowa guy.”

Joensen, who is 59 years old, grew up in Ames. He first studied to be a medical doctor before entering the priesthood in 1989. Joensen, a life-long Iowan, has served parishes in Waterloo and Dubuque and has been a long-time member of the faculty at Loras College.

“I’ve always wanted to spend my life here, serving the people,” Joensen said. “I love the premium that people place on education, their no-nonsense approach to life. That’s a healthy reality check both for politicians and priests alike and I respect our culture’s values that find their nucleus in the family and community.”

Joensen said he hopes to restore any “bruised or broken trust” in the church caused by clergy abuse.

“I think a missing piece of this that is still taking shape…is simply how will bishops be holding one another accountable,” Joensen said.

Joensen said the subject should not be ignored and he’s “not been afraid to preach about” the subject.

Joensen will take over from Bishop Richard Pates, who is retiring. There is a sort of mandatory retirement age for bishops. Pates turned 75 in February of 2018 and submitted his letter of resignation to Pope Francis.

“The wait has been well worth it for the quality leader that we will now go forward with here in the Diocese of Des Moines,” Pates said as he introduced Joensen to reporters as well as Diocese staff and parishioners gathered in the Diocese headquarters this morning.

Now, as the pope has named Pates’ successor, Pope Francis has accepted Pates’ resignation. Pates will remain as the diocese administrator until Joensen is ordained this fall. Pates plans to retire to his home state of Minnesota.