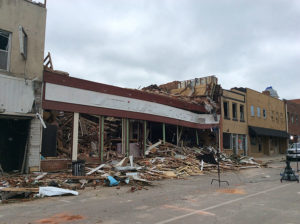 Downtown Marshalltown prior to clean up.

Today marks one year since an EF-3 tornado plowed through the northern section of Marshalltown, leaving behind a path of damage — but no loss of life or any serious injuries.

One of the many images that folks remember showed the cupola atop the Marshall County Courthouse being swatted to the ground by the twister. The storm also ruptured the building sprinkler system, sending out rivers of water on the east side of the historic courthouse.

Marshall County Supervisor Steve Salesek was among the county personnel who were soon the scene “We went upstairs and poked our head out of the top where the mast used to be. There was a gaping hole us there about eight to ten feet, so we had quite a view up there for a short time,” Salesek says. The initial damage estimate on the Courthouse exceeded $17 million. The plan is for the County to move back into the Courthouse sometime after Valentine’s Day next year.

Another image was of the damage to the RACOM building. The tornado ripped the siding off the building so you could see right through it. RACOM CEO Mike Miller says their repair work will take another six months.  “The outside of the building will be an aluminum panel, the siding is built to withstand winds of 150 miles-an-hour. I think you’ll see bigger windows, nicer windows, a nicer, more modern design. But we feel a responsibility to sort of , when given an opportunity, to upgrade and make things nicer,” Miller says.

An ice cream social is among the events scheduled to help mark the anniversary of the tornado.