You are here: Home / News / Tips to beat the heat without breaking the bank on your next utility bill 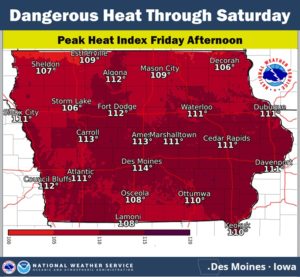 Today could be the hottest day yet in this latest heat wave, with high temperatures in parts of central Iowa forecast to hit 99 degrees with a heat index of 114. Air conditioners are getting a workout with Excessive Heat Warnings posted for the entire state.

Alliant Energy spokesman Mike Wagner says overnight low temps are staying quite warm and customers should plan ahead to avoid sticker shock from their utility bill.

“On that overnight, your air conditioner is not going to get a break,” Wagner says. “These machines are going to be running in a pretty long cycle here for the next couple days. We think it’s important for customers to recognize that and then also try to look for ways to control their energy use so they don’t get a big surprise in August when their bills come and they’re surprised at the amount of energy they’re using.”

Wagner says make sure your air conditioner has had a tune-up recently.

“A friend of mine was having problems with their air conditioner and found out that it was down to about 20% coolant,” he says. “They had a service tech come out, clean it, do the service on the machine but also add more coolant, and then the machine was working much more efficiently, it wasn’t running as often and was cooling at a much better rate.”

He also suggests you have a clean filter inside and out so airflow isn’t restricted. Wagner says to use ceiling fans and box fans to keep cool.

“Think of it kind of like using those fans as creating your own wind chill,” Wagner says. “I don’t know if I’d necessarily rely on them to circulate air around the house, but to have that cooler air blowing on you helps cool you down, and also allows you to maybe turn the temperature in your thermostat up a couple degrees so that you don’t necessarily need to have your air conditioner working quite so hard.”

Wagner says this is not the time to use your oven.

“Use the stove top if you need to, use a toaster oven, crock pots, instant pots are really popular,” he says. “I can find an excuse to grill just about anything. You don’t want to turn the oven on. This is not really the time during the heat wave here to start baking a cake or maybe put a pizza in the oven if you don’t need to, because those are things your air conditioner has to compete with.”