You are here: Home / News / Meeting in Muscatine to focus on Mississippi River flooding 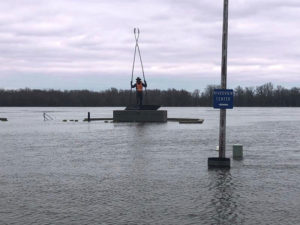 Eastern Iowans will have the opportunity to share their hopes and concerns for the flood-prone Mississippi River at a public meeting this weekend.

Officials from the U.S. Army Corps of Engineers and the Upper Mississippi River Basin Association are putting on the event. Kirsten Wallace heads the UMRBA and says the feedback will ultimately inform a regional resiliency plan.

“Before those decisions are made to invest money into a system plan,” Wallace says, “we do need to have these conversations to describe what that is, how they’re willing to work together, our stakeholders, plus our states and different levels of government, and show them exactly a roadmap.”

The proposal will ultimately cover five states and is meant to improve river management in the context of a changing climate. Wallace hopes the public meetings will help bridge interest groups on the Mississippi. “It’s so important in my mind for those constituents to hear each other and then to say, ‘Okay I hear what you’re saying, how about we do some of what I want and some of what you want, and what would that look like?’ And we would help them imagine what that could look like,” she says.

The event is slated for Saturday in Muscatine. Another listening session is scheduled for July 27th in Dubuque.