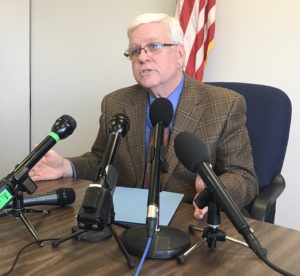 Democratic lawmakers in the Iowa House and Senate are calling for an investigation of why Republican Governor Kim Reynolds asked a former state agency director to resign.

Former Iowa Department of Human Services director Jerry Foxhoven told a reporter for Pitchfork — an online magazine — that he got a troubling request from the governor’s staff.

“Her staff staff asked me to do something that I thought was illegal and I wouldn’t do it and so they said, ‘O.K., well then you need to go,'” Foxhoven told the magazine.

Foxhoven declined to say what he had been asked to do.

“I was concerned about the legality of what they asked. I was concerned and said I wouldn’t do it without a legal opinion,” Foxhoven told Pitchfork’s reporter. “…They terminated me before I could get that opinion.”

A spokesman for Governor Reynolds said Foxhoven “never raised a concern like that” to the governor’s staff and they “have no idea what Foxhoven is referring to.” Reynolds has said there were “a lot of factors” that went into her decision to ask Foxhoven to resign.

“The former director’s vague comment to a music publication has not come with any other details,” House Speaker Linda Upmeyer, a Republican from Clear Lake, said in a written statement. “I would not have our chairwoman of the Oversight Committee initiate an investigation when the former director has declined to elaborate.”

(This post was updated at 1:54 p.m. with additional information.)