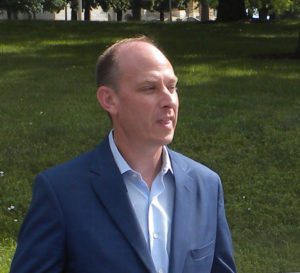 The Iowa Lottery says the fiscal year that ended in July produced the best sales in its history.

Iowa Lottery CEO Matt Strawn talked about the preliminary budget numbers Tuesday at a store in Cedar Rapids.
“Today marks the first time in the 34-year history of the Iowa Lottery that we generated proceeds in excess of $90 million,” Strawn says.

The Iowa Lottery turned $92.8 million over to the state out of record sales of $390.1 million. There was a record prize payout that totaled more than $241 million. The sales increased by 5.4% from the previous year’s total of $371 million.
Scratch-ticket sales lead the way for the fifth straight year — totaling $250.6 million.

Mega Millions sales in Iowa also helped spurred on by jackpots that topped the $300 million mark four times. That included a prize of more than $1.5 billion in the October 23rd drawing that was the largest jackpot in the history of the game.