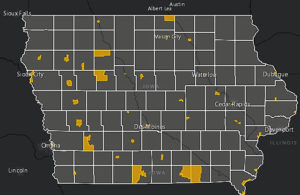 They’re called Opportunity Zones and 62 of these areas have been designated across the state. One of them is in Denison where Mayor Jared Beymer announced last week 45 housing units will be built to address the community’s housing shortage.

“It’s brought in local investors, and it’ll probably bring in some money from outside of the community,” he said. “It could turn out to be quite a very useful tool.”

Naomi Hamlett is a city official in Des Moines, where an Opportunity Zone project is underway near Drake University. It will include a restaurant, retail space and a hotel.

“We haven’t seen a new hotel in that part of the city for a very long time,” she says. “…The hope is that the program will provide economic stability, job growth, and improved housing conditions in disadvantaged areas that have traditionally been overlooked by the private sector.”

Here’s the map showing the 62 Opportunity Zones in Iowa.