Moms Demand Action and Everytown for Gun Safety held a forum in Iowa today and, while the crowd applauded the gun-related policies of the Democratic presidential candidates who spoke, the audience was equally animated about building a movement to counter the National Rifle Association.

“In the 2018 midterm elections we outspent the NRA and we outmaneuvered them,” Shannon Watts, founder of Moms Demand Action said in opening remarks. “…Going into 2020 the NRA is weaker than it’s ever been and our movement is stronger than it’s ever been, giving every ‘gun sense’ candidate a clear advantage.” 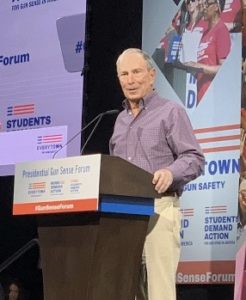 Former New York City Mayor Mike Bloomberg promised to dip deeply into his fortune and bankroll “the most massive effort on gun safety our country has ever seen.”

“We’re going to win races up and down the ballot and if that means I have to buy a red t-shirt for every mom in America who wants to join our cause and one for every dad and aunt and uncle and student who wants to join, just send me the bill,” Bloomberg said, to cheers.

Bloomberg told the crowd after the “tragically sad” shootings in El Paso and Dayton, their presence in Des Moines ended the week on a “hopeful note.”

Ohio Congressman Tim Ryan was the first of 15 candidates to speak to the crowd in person. The crowd erupted with cheers when Ryan mentioned defeating Mitch McConnell, the U.S. Senate’s Republican leader. A few minutes later, Ryan counseled the crowd that their lobbying must be a “bottom up” effort.

“You’re not going to tweet your way into making this happen, sad as it to say,” Ryan said. “This is going to be knocking on doors…you go eyeball-to-eyeball with people. You tell your stories like you’re doing.”

Victims of shootings from all around the country as well as relatives of those who’ve died in shootings asked the candidates questions. South Bend, Indiana Mayor Pete Buttigieg told the activists the country “cannot allow what amounts to a war to continue.”

“I beg you to stay on those front lines,” Buttigieg said at the conclusion of his time on stage, as the crowd stood and the cheers nearly drowned out his voice. “This will change with your help.”

Many of the candidates — including former Vice President Joe Biden — were asked how best to “counter the influence” of the NRA.

“The vast majority of people, including gun owners, agree with us. Members of the NRA agree with us,” Biden said. “The people who are going to make a difference in terms of giving some backbone to those Republicans, in particular, and a few Democrats who are afraid to take them on are all of you.”

Massachusetts Senator Elizabeth Warren said campaign finance reform would go a long way to breaking “the stranglehold” the gun industry has on congress.

“We are going to make this a congress, make this a government that is responsive to the will of the people. That’s why we’re here,” Warren said, to cheers.

Former Texas Congressman Beto O’Rourke, who has spent the past week in his hometown of El Paso, recorded a video message for the event. New Jersey Senator Cory Booker, attending his late aunt’s funeral today, sent a brief video which was played for the crowd this morning as well.