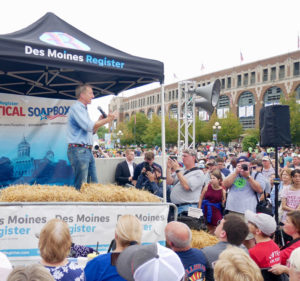 Democratic presidential candidate Tom Steyer today said “it not enough” for Democrats to win the presidency in 2020.

Steyer, a billionaire from California, said the party must press forward with reforms like term limits.

“We’re talking about breaking their back. We cannot have a nice, close victory,” Steyer said. “We need a mandate to break the corporate control.”

Steyer spoke Sunday afternoon at The Des Moines Register’s Political Soapbox at the Iowa State Fair. Steyer, a billionaire from California, criticized the president’s trade policies and told the crowd Trump has no plan for ending the trade war he’s started.

Steyer has bankrolled voter turn-out efforts in Iowa since 2013 and bought national TV ads calling for the impeachment of President Trump. Steyer held a news conference in Des Moines in January, saying he would not run for president. This weekend marks Steyer’s first visit to Iowa since he announced this summer that he would run. Steyer said Trump has encourage a climate of “crisis and failure.”

“We have to become again the leader of not just the free world, but the world. Mr. Trump is dead wrong with his ‘America First’ policy,” Steyer said. “The last time they tried that, it was to support Hitler.”

Steyer has promised to declare a “climate emergency” on day one if he’s elected president. He argues developing the technology to address climate change will revive America as the world’s economic powerhouse and allow the government to provide health care as a right and free public education from preschool through college.