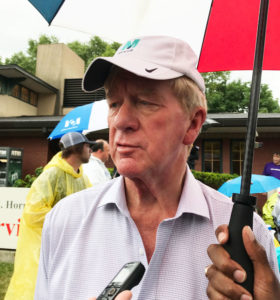 “If you can knock off a sitting president in the New Hampshire Primary, that president is wounded, to put it mildly, and who knows where it goes from there,” Weld said during an interview.

Weld started his first campaign trip to Iowa on Sunday, speaking on The Des Moines Register’s Political Soapbox at the Iowa State Fair. Weld emphasized his budget-cutting record as a two-term governor of Massachusetts and he told the crowd he doesn’t think Trump is a “real Republican.”

Weld, who ran as the Libertarian Party’s 2016 vice presidential nominee, told reporters the Libertarian ticket did not siphon votes away from Hillary Clinton and ensure Trump’s victory. Weld described himself as coming from “the Libertarian side” of the GOP and told fair-goers he’s running because he’s troubled by Trump’s presidency.

“We shouldn’t spend all our time listening to someone try to persuade us that some brown person is going to come a across the southern border, the Mexican border, and take our job, further kindling economic insecurity, or harm our wife or our children,” Weld said. “It’s demagoguery of the first order.”

Weld fielded questions from the crowd about veterans’ health care, transportation, energy policy and banning assault weapons, which he opposes. Supporters of President Trump were in the crowd, but did not disrupt Weld’s speech.