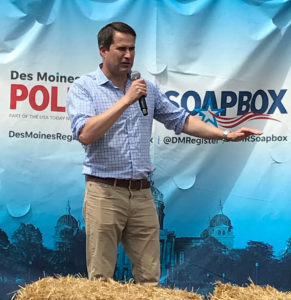 “What I’m hearing from Americans is that they want people who are willing to stand up to the Washington establishment and not just talk about a new generation of leadership in our country, but actually fight to bring it,” he said.

Moulton highlighted his service as a Marine Corps captain and his ability to lead a diverse group of soldiers. His message of unity, he argued, extends to economic policy. 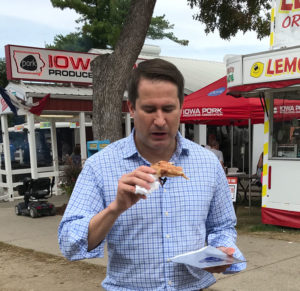 Seth Moulton eats a pork chop on a stick.

“You’re not evil, if you’re rich. You should aspire to be successful. We’re not pitting rich people against poor people, but we are making sure everyone pays their fair share,” Moulton said.

Moulton referred to his low polling numbers early on in his Massachusetts race and joked about being unknown. Moulton, however, said he is undeterred by his “underdog” status.

His policy positions include support for the Green New Deal, a national service plan for young Americans and a single payer healthcare system. Moulton got his biggest burst of applause from the audience when he called for President Trump’s impeachment.