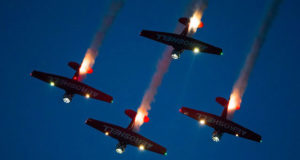 After an absence of several years, the Central Iowa Air Show will return later this week under new management.

In the past, one highlight was the use of remote control model aircraft to stage events like the attack on Pearl Harbor. Air show spokesman Isaac Campbell says the new air show at the Ankeny Regional Airport, just north of Des Moines, will include both remote control and real airplanes.

“We have model pilots coming from around the United States bringing their model propeller and model jet aircraft and they’ll be having their own event that the public can come and watch,” Campbell says. “The main event is the full-scale air show where we’re bringing in the world’s best pilots to do all kinds of fantastic aerobatic displays.”

The air show starts Friday evening with what’s called Night Flight — it’s billed as the world’s only nighttime airshow and music festival. Four bands will be performing, along with flyovers from a series of lighted aircraft. “The real exciting act is going to be Ghostrider and his plane comes with 600 pounds of pyrotechnics that will fire off from his wings as he’s doing all of his stunts from the air,” Campbell says. “It’s going to be practically a fireworks show coming from an airplane.”

There’s a long list of aerial acrobatics teams that will be buzzing the airfield on Saturday and Sunday, including a dogfight between two pilots and a jet-powered fire truck that can drag race at speeds exceeding 400 miles-an-hour. He says the crowd will also get a close-up look at tilt-rotor aircraft.

“We have secured a demonstration from the United States Marine Corps and the Osprey demo team,” Campbell says. “Those are the planes that have the propellers that can be a helicopter and it can also a plane.” A portion of the proceeds from the air show will go to support the Iowa Aviation Heritage Museum at the airport in Ankeny. It’s dedicated to restoring and preserving World War Two-era, rare and unique aircraft.