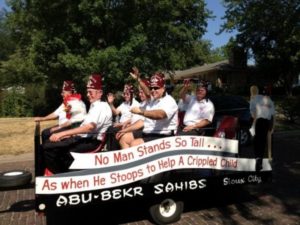 Saunders says there will two parades, the first in Downtown Sioux City Thursday evening at 6:30 p-m (on 3rd Street).

He says each temple had different and unique vehicles and many that some people have never seen before.  “There will be so many different kinds of units, it will be unbelievable to see,” Saunders says.  The second parade will be in South Sioux City on Saturday morning at 9:30 a-m. The Shriners are most known for their hospitals and work with children needing medical attention.

“We do all sorts of help for the kids, burn, spinal cord, cleft lip, all that stuff. We’ve got 22 Shriner hospitals around the country,    We are international now too,” according to Saunders. This marks the first time in more than 80 years that Sioux City will be the host to the Central States Shrine Association Summer Session.