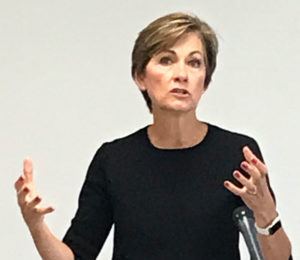 Governor Kim Reynolds and Midwest governors are planning a trip to Washington, D.C. to talk with President Trump about unrest in farm country.

“Let him know first-hand what’s happening on the ground,” Reynolds said this morning.

The Trump Administration recently granted waivers to oil companies, so the federally-required amount of ethanol doesn’t have to be blended into gasoline.

“We’re trying to give them some options…to really address the short-term crisis that we’re seeing with ethanol plants either shutting down or cutting production,” Reynolds said.

A northwest Iowa plant shut down temporarily earlier this month and another company that owns six plants in Iowa has cut its company-wide ethanol output. The Iowa Corn Growers Association issued a statement this morning, saying farmers are “fed up” with President Trump’s “broken promises.” In addition to the ethanol situation, farmers have been up in arms about USDA harvest projections in mid-August that caused corn prices to nose dive.

“This has been a rough, rough year between flooding, delaying plants, rosy crop reports,” Reynolds said. “We’ve got continued disruption in trade that we’re working through.”

Reynolds is hoping the Trump Administration will embrace a compromise plan that would boost ethanol production by requiring additional ethanol use at oil refineries that did not get a waiver.

Reynolds said Trump “is trying to do the right thing” by farmers, but the EPA continues to “undercut” the federal ethanol production mandate.

“We can’t continue to lower the floor and expect the industry to survive and continue to grow,” Reynolds said this morning.

According to the Reuters wire service, Trump personally gave the go-ahead for the oil refinery waivers. Reynolds told reporters this morning she’s not sure Trump “fully understood the ramifications” of those waivers at the time, but the governor said Trump does now after lobbying by her and several other Iowa officials. Reynolds, who just signed on as Iowa co-chair of Trump’s reelection campaign, said “relationships matter” and she’s able to call Trump and his top administrators to discuss these issues.