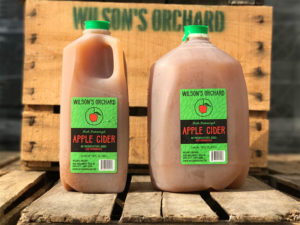 Iowa apple growers are benefiting from a resurgence in an old-time beverage made from their crop.

Wilson’s Orchard near Iowa City makes sweet and hard cider — which owner Paul Rasch says gives their products a wider audience. “We sell our hard ciders both packaged and on draft pretty much across Iowa under the Wilson’s Orchard brand,” Rasch says. “And we sell our sweet ciders just for a limited time — starting in September and going through December — in supermarkets and at our farm market here.”

He says hard cider was once the favorite adult beverage. “Hard cider used to be the alcohol of choice for Americans almost right up until prohibition. Prohibition kind of put the kibosh on hard cider and beer kind of took over,” according to Rasch.

Hard cider is finding its way back as a choice for alcohol drinkers. “There has been a real resurgence in the interest in cider. It’s gluten free, it’s just not as heavy as beer. And it’s sort of a pallet that you can lay a lot of different flavors onto,” Rasch explains.

He has tried to focus more on growing apples dedicated to cider to take advantage of the expanding interest. “The hard cider market is not only expanding, but it’s developing in very interesting ways,” Rasch says. “So like for us, we’ve got five acres of orchard now committed just to varieties for making cider. There’s specific cider apple varieties that make a higher tannin cider higher quality.”

He says the hard cider is product where you can make it from the crop you grow right here. “You know you can make great beers — Iowa is making great craft beers — but you can’t grow barely here. You can make wines — but it is hard to grow the really premiere wine varieties here. But you can grow great apples,” he says.

Rasch grew up in Michigan where they grow a lot of apples. He says Washington state is known for growing apples, but he believes in the product grown here benefit from the climate. “I’d put the flavor of our apples up against any other growing area in the United States. These tough growing conditions we have this year is a good example of them, hot, cold, wet, dry, you name it,” Rasch says. “I just think it builds character. It builds flavor in apples.”

Wilson’s Orchard is open through December.