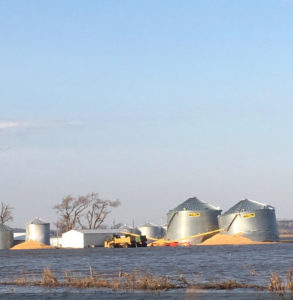 According to state officials, farmers in Fremont, Mills and Potawattamie Counties lost nearly $11 million worth of corn and soybeans when Missouri River floodwaters swamped their grain bins. In some cases, the submerged grain swelled as it spoiled and the walls of the bins ruptured. Officials estimate more than $11.5 million worth of damage was done to 418 Iowa grain bins this spring.

The U.S.D.A. is also preparing bonus payments for some farmers who could not get their flooded fields planted this spring.

A U.S.D.A. news release indicates stored-grain payments will be based on 75 percent of the crop’s 2018 value, on the assumption that the grain was harvested last year release. Farmers can begin signing up for the federal disaster aid this Wednesday, September 11, 2019.

A news release from Naig’s office included these additional details about a separate batch of U.S.D.A. payments: “Producers who filed flooding or excess moisture-related prevented planting insurance claims in the calendar year 2019 will receive a supplemental disaster “bonus” payment equal to 10 percent of their prevented planting indemnity. An additional 5 percent prevent plant supplemental disaster bonus payment will be provided to those who purchased harvest price option coverage.”