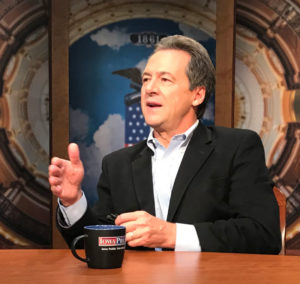 Montana Governor Steve Bullock says it’s time to end the perpetual campaign. Bullock, one of the Democrats who’s running for president, is proposing new limits on when candidates for federal office may raise money for their campaigns.

“President Trump essentially right after taking the oath of office reopened his campaign. U.S. Senators, everybody makes it almost that you’re campaigning full-time for these jobs,” Bullock says. “While it might sell cable television ads, I don’t think that’s what most folks want.”

Bullock was not among the 10 Democratic presidential candidates who debated last night in Houston. He’s been in Iowa the past two days, arguing the race won’t be decided by the debates.\

“I think it’ll actually be decided by Iowans,” Bullock said. “The early states has always been what takes a big field and narrows it down.”

Bullock points to the experience of 2004 Iowa Caucus winner John Kerry, who went on to win the Democratic nominee that year.

“I think it was 30-some days out from the Iowa Caucuses John Kerry was 4 points. Al Sharpton was beating him,” Bullock says. “Once folks really start paying attention along the way — and I think that usually comes fairly late along the way, that’s how we take a big field and make it much smaller.”

Bullock, who supported Joe Biden’s 1988 bid for the White House, says voters in 2020 “want to look forward, not backwards.” Bullock made his comments today during taping of the “Iowa Press” program that airs tonight on Iowa Public Television.