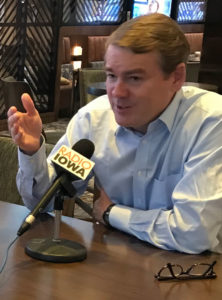 Colorado Senator and Democratic presidential hopeful Michael Bennet spent the weekend campaigning in Iowa, illustrating that Bennet is among the candidates banking on a break-out finish in February’s Iowa Caucuses.

No other candidate has spent as much time in the state in September.

“We’re going to continue to stay until we begin to make progress,” Bennet said during an interview with Radio Iowa. “…It seems to me that post-Labor Day is when people start to really pay attention here.”

Bennet, who is 54 years old, participated in the first two rounds of televised debates, but did not meet the fundraising and polling criteria to be among the 10 candidates who debated last Thursday night.

Bennet argues the televised debates have done little to alter the race.

“People ask sometimes: ‘Well, what’s your break-out moment going to be?’ Historically, I think candidates that have put one foot in front of the other and met with people in their living rooms and in their storefronts have done well in these early states,” Bennet told Radio Iowa, “and that’s what I’m going to continue to try to do.”

Bennet was in a private home Sunday morning, talking about foreign policy. On Saturday, Bennet touted his focus on universal preschool rather than erasing college loan debt as well as his proposed 50 percent increase in the child tax credit parents may claim on their income taxes.

“We can actually make a difference,” Bennet said. “…Washington doesn’t have to just be about a partisan fight that never leads anywhere. We can pull some levers that really change America.”

Bennet is a Yale educated attorney, but he emphasizes a different part of his resume on the campaign trail.

“I’m the only school superintendent that’s ever run for president as far as I can tell,” Bennet often says.

Bennet served as superintendent of Denver Public Schools for four and a half years before being appointed to the U.S. Senate in 2009. He has won two statewide elections in Colorado since then, in 2010 and 2016. He has been arguing against the “Medicare for All” plan some of his competitors have embraced as well as proposals to erase student loan debt and make public colleges tuition-free.

“We’ve got to set some priorities here,” Bennet says. “We can’t give free stuff to everybody.” Bennet told Radio Iowa.

Bennet touts his work across the partisan divide in the U.S. Senate, including a bipartisan immigration reform plan that won Senate approval, but was not considered in the House.

Bennet this weekend said the Democratic Party’s nominee must be more than just anti-Trump, but must offer an agenda that unites the country.