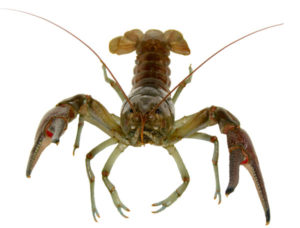 Things have gotten a little too cray-cray with an invasive species in Storm Lake, prompting the Iowa DNR to impose a new regulation on the Buena Vista County body of water.

DNR Fisheries Invasive Species Coordinator Kim Bogenschutz says they’re blocking bait collection of crayfish on the lake after an infestation of rusty crayfish was discovered. “This is the first lake in Iowa that we’ve confirmed rusty crayfish in and we’ve only seen them in really low numbers in rivers in eastern Iowa,” according to Bogenschutz. “It’s a new infestation for us — and we want to keep it contained in that area.”

She says the rusty crayfish can cause all kinds of problems in a lake. “Rusty crayfish are a bigger crayfish than our native crayfish. They’re very aggressive, they can outcompete our native crayfish. They also will go into fish nests and eat their eggs. They also eat vegetation,” Bogenschutz says. She says Storm Lake does not have enough vegetation already, so that is a concern if more disappears.

Bogenschutz got a first-hand experience of the aggressiveness of the crustacean as she was trying to check out another invasive species in Storm Lake. “Our intent was to look at the zebra mussel reproduction in Storm Lake this year and inadvertently also saw lots of rusty crayfish. Because as we were trying to turn over rocks to look at the zebra mussels under them, we saw lots of rusty crayfish. They were crawling out from under them and trying to bite us,” Bogenschutz says, “so yeah, they are very aggressive, they will try to bite you.”

Bogenschutz says they don’t want the rusty crayfish moving into any other lakes — and that is why they put on the restrictions. She says as a precaution they eliminated any commercial crayfish harvests from Storm Lake to be used as bait. “As an individual if you want to collect them and use them in Storm Lake — that’s fine — you just can’t collect them and then take them to another lake. Any crayfish,” Bogenschutz says.

She says they are banning the use of all crayfish to avoid the confusion of trying to pick the rusty crayfish out from the native crayfish. Bogenschutz says the rusty crayfish likely got into Storm Lake by anglers releasing them from bait buckets or people releasing them from aquariums. She says people don’t realize the problems they create when they release things into lakes that aren’t meant to be there.

Bogenschutz cites another example they’ve been seeing recently. “We are seeing all across the Des Moines metro area, goldfish in ponds. And not little baby goldfish that are cute and you put in a bowl — I mean two to three pound goldfish,” Bogenschutz explains. She says people put them in the ponds and they grow and take over and crowd out the native species of fish.

Bogenschutz says boaters can help prevent the spread of invasive species with some easy steps. “Cleaning and draining and drying your equipment when you are going from lake to lake,” Bogenschutz says. Small populations of the rusty crayfish can be found in the Maquoketa, Middle Iowa, Upper Cedar, and Upper Wapsipinicon rivers in eastern Iowa.