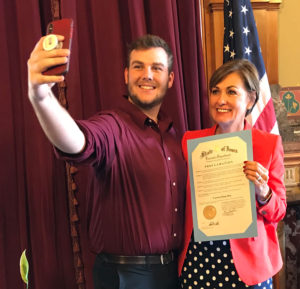 Carson King takes a selfie with the Governor.

Governor Kim Reynolds has declared this Saturday “Carson King Day” in honor of the former ISU student who’s now aiming to raise $2 million for the University of Iowa Children’s Hospital by this weekend.

“It takes all of us making a difference and we’ve had one individual that has made a big difference in a short amount of time,” Reynolds said this afternoon during a ceremony in her statehouse office.

King, who is 24 years old, held up a humorous sign seeking beer money during ESPN’s “College Game Day” broadcast before this year’s Iowa-Iowa State game in Ames. Donations poured into his Venmo account and King soon announced he’d donate the money to the Children’s Hospital in Iowa City.

“Individuals like Carson King demonstrates how ‘Iowa Nice’ isn’t just a slogan, but our way of life,” Reynolds said.

King was invited to attend the event and he watched as the governor signed the proclamation in his honor. His impromptu fundraiser ends this weekend. King and his family have been given tickets to Saturday’s game in Iowa City, so he can witness the crowd do “The Wave” to children in the hospital that overlooks the stadium.

“Carson King can showcase who we are as a people, not only by selflessly donating to a worthy cause, but spreading the message of generosity,” Reynolds said.

Reynolds praised King for being a “force for change.”

“The Carson King story embodies a young man’s ability to help a cause greater than himself and can serve as a model for others to follow,” Reynolds said, as she read the proclamation. “And whereas Carson has shown that one person can make a difference and one person can make a positive change, even through the unlikeliest ways.” 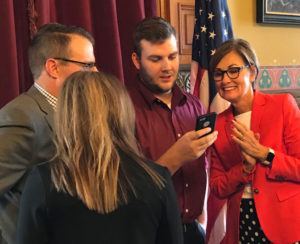 The crowd gathered around the governor’s desk included King and his family, as well as a group there to see the governor recognize September as “Childhood Cancer Awareness” month.

“Childhood cancer is the leading cause of death by disease in children,” Reynolds said. “…There are approximately 40,000 children on active treatment at any given time.”

The governor got her own phone out to take a selfie with King. And King showed the governor his fund raising tally was near the $1.5 million mark.