You are here: Home / News / September rainfall was well above average 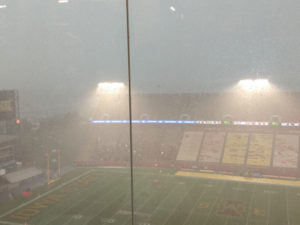 Heavy rain at Jack Trice Stadium during the Cy-Hawk game.

September wrapped up in Iowa feeling more like June.

State climatologist Justin Glisan says the statewide average temperature for the month ended up around 68 degrees, which is 5 degrees warmer than normal. Glisan says besides being warmer, the weather was also wetter. “We were at about 6.5 inches across the state and that’s almost 3.38 inches above average,” Glisan says. “Yes, trending wet. If you look at the borders between Iowa and Illinois, anywhere from 200 to 300% above normal precipitation.”

Forecasts indicate the shift toward wetter, warmer weather may well continue into this month.  “We should see seasonal if not slightly above-average temperatures for the first part of October,” Glisan says. “As for rainfall, we are having higher probabilities of wetter-than-normal conditions.”

We saw a very similar set-up heading into autumn a year ago. “We did see the third-wettest September in 2018 followed by the seventh-wettest October, combining those for the third-wettest fall on record,” Glisan says. “Hopefully, we don’t get into that type of situation this year.”

The flash flood watches being issued by the National Weather Service have multiplied in number since Monday and now cover 78 of the state’s 99 counties.  “We’re stuck in this jetstream pattern where we’re getting wave after wave of rainfall over the state,” he says. “These flash flood watches span several states.”

Forecasters say dry weather is expected later this week, on Thursday and Friday, but more rain is likely Friday night and into Saturday.